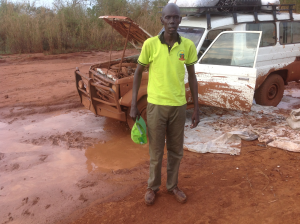 Kids In Crisis is partnering with a very special brother by the name of Alex Bolek.  Alex was born in Sudan and currently lives in South Sudan.

Alex had attended medical school in Romania in the late 1990’s where he completed his studies in medicine.  While in Romania Alex invested in the lives of other international medical students with a student ministry he established and he also helped in the Gypsy village from time to time.

After completing his degree Alex and his wife Helen moved back to Sudan.  The civil war in Sudan had lasted for 22 years and was one of the longest civil wars on record.  In 2011, six years after war ended, South Sudan, became an independent nation. This was the region from which Alex had escaped for his life when he was a child.  At the establishment of South Sudan Alex and Helen moved to the capital city of Juba in South Sudan.

For years Alex had been cut off from any communication with his family. He did not know who in his family had survived the war.  In Christmas of 2013 Alex returned to Terekeka County in South Sudan where his family lived.  Alex learned that his father had died in the war, but was happy to learn that other family members had survived.  It was extremely distressing for him to see firsthand the devastating effects of war in this region, especially in the lives of children.  Alex knew he must do something to help these children.

Alex wrote to us and said, “… if we keep silent this time or pretend that we have not seen any need that needs to be met, God is ready to use or bring someone else.  One must take risk to be able to accomplish something for His people.  Fear of failure always keeps us back from trying something new.  One saint said faith is spelled R-I-S-K.” Alex’s vision is for the school is that it be a “Rescue Mission” for the children of South Sudan.

We feel compelled to help Alex reach the children in South Sudan with the love of Jesus. A ministry similar to what is operating in Romania is currently being established in South Sudan.  However, Alex has obstacles to overcome we could never have dreamed of eighteen years when we began working in Romania.  Warring factions still make it dangerous in South Sudan.  The area where Timothy School is located is further away from the violence, but the threat is real and is always present.

Things you can do: